It’s this time again : the time for the very controversial numbers about realtime feeds. Before anything else, I’d like to indicate that it would be great for other services to publish similar numbers. We know who implemented PubSubHubbub, I guess some of them implemented RSSCloud and SUP too.

Since we have so much debate in the past about the methodology:

A few notes on the result set before. We have multiplied by 6 the number of feeds we managed since the last time we count, which should make our set a little more representative. As a matter of fact we gained a lot of feeds that are not blogs. 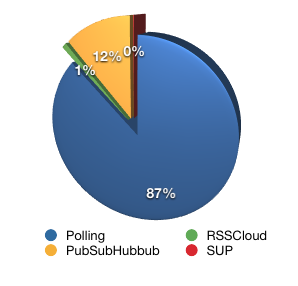 You can immediately see that the proportion of feeds we’re polling increased compared to the last measure. This is the consequence of less PubSubHubbub feeds. Back in november, we counted the PubSubHubbub feeds we were hosting. That was a mistake, we changed that this time and will not count them in the future either. The RSSCloud proportion grew in comparison, since PubSubHubbub numbers were inflated.

We are now continuously measuring the proportions, which should make these posts way more regular. I look forward to the next month!

In conclusion, I’d like to remind you that we implemented many other ways of getting feed updates, including some specific APIs, XML-RPC Ping and other techniques. If you use Superfeedr, you will benefit from these and get feeds in realtime!

1 At that time we had not implemented SUP.

Previously, on the Superfeedr blog: Why realtime matters for publishers.