You may have heard of WebIntents. At least, here.
We’re proud to say that msgboy now supports WebIntents completely: it triggers intents (sharing stories), and handles them (subscribing).

Sharing stories is a key feature of many readers. People just don’t read for themselves only. Up until now, Msgboy offered our users the ability to share stories on Twitter and Facebook. This is good because these are obviously very popular outlets. Yet, some people use Google+, Status.net, Kippt and who knows what other services! In the future too, these services will likely not be as popular and some new ones will appear. We do not want to couple Msgboy too much with any specific service: WebIntents is the solution! 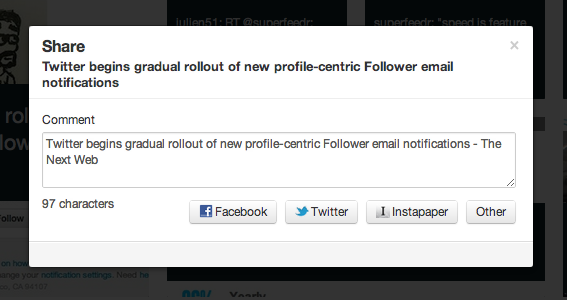 In short, webintents aims at binding to actions, rather than services.

If you’re using Chrome, try it by yourself:

Currently, only Chrome applications can register as intent handlers. If you do not have any Chrome app that is able to handle this Share intent, you will be offered a couple choices from the Chrome WebStore. 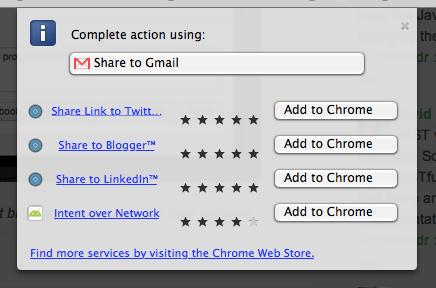 Another huge benefit of this button is that it doesn’t secretly sniffs all your analytics or track your users wherever they go on the web.

If your web application has a Chrome application, you can register the intent by adding the following to the extension’s manifest file:

Now, when people click on a , they’ll be able to use Msgboy (or any installed app that registered the Subscribe intent) to achieve that. That’s quite elegant, isn’t it?

In terms of implementation, when the user clicks on the button, he will be redirected to the href value, which can then handle the intent on behalf of the user.

Intent registering applications can also register a view intent, which will be called by default to represent a specific Mime-Type. For example, Msgboy registers the view intent on the application/xml+atom and application/xml+rss, so that, if you have msgboy installed, you can use it to view a feed’s content, and maybe subscribe to it.

We sincerely hope WebIntents become ubiquitous, supported by all modern browsers, as well as by all web application makers. They’re links 2.0, and the faster we get there, the better for the web!

Previously, on the Superfeedr blog: Activity Streams for iTunes feeds.